Realme C35 was launched in India on Monday as the company’s latest budget model. The Realme phone comes with triple rear cameras that include a flagship-grade 50-megapixel primary sensor, full-HD+ display, and an octa-core Unisoc SoC. 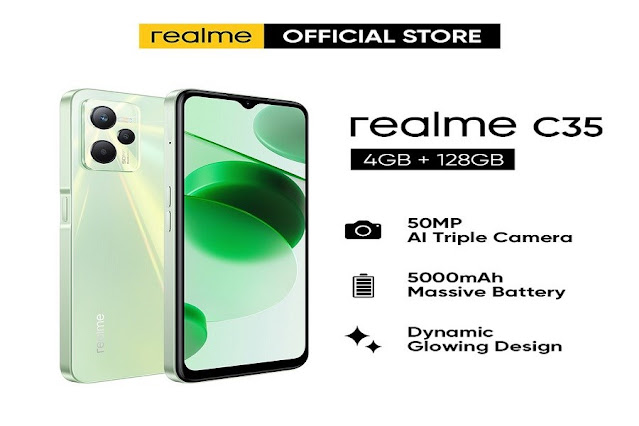 The Realme C35 also comes in two different variants, with up to 128GB of onboard storage. The smartphone includes a side-mounted fingerprint sensor and 5,000mAh battery. The Realme C35 is the successor to the Realme C25 that was launched in India in April last year. The phone will compete with Redmi 10 Prime, Moto E40 and Samsung Galaxy M12.

Price in India :
Realme C35 price in India starts from Rs.11,999. For the base 4GB RAM + 64GB storage variant. The phone also comes in 4GB + 128GB model, which is priced at Rs 12,999. The Realme C35 comes in Glowing Black and Glowing Green colors and will be available for purchase from March 12 (noon), March 12. It will go on sale via Flipkart, Realme.com and retail outlets in the country.
Last year, the Realme C25 was launched in India with a starting price of Rs 9,999. For 4GB + 64GB model. It also came in 4GB + 128GB model.
Realme C35 debuted in Thailand last month. It was launched at THB 5,799 (approx Rs 13,600) for the 4GB + 64GB model and THB 6,299 (approx Rs 14,700) for the top-end 4GB + 128GB option.
Specification :
The dual-SIM (Nano) Realme C35 runs on Android 11 with Realme UI R variant on top and features a 6.6-inch full-HD+ (1,080×2,408 pixels) display with 90.7 percent screen-to-body ratio Is. Under the hood, the phone packs an octa-core Unisoc T616 SoC along with 4GB of LPDDR4X RAM as standard. The triple rear camera setup on the Realme C35 houses the same 50-megapixel primary sensor as is available on the Realme GT 2 with an f/1.8 lens. The camera setup also includes a 2-megapixel macro shooter with f/2.4 aperture and a monochrome (black and white) sensor with f/2.8 lens.
For selfies and video chats, the Realme C35 packs an 8-megapixel Sony IMX355 selfie camera sensor on the front along with an f/2.0 lens.
On the storage front, the Realme C35 comes with up to 128GB of UFS 2.2 storage that supports expansion via microSD card up to 256GB. Connectivity options include 4G LTE, dual-band Wi-Fi, Bluetooth v5.0, GPS/ A-GPS, USB Type-C and 3.5mm headphone jack. Sensors on board include an accelerometer, ambient light, magnetometer, and a proximity sensor. The phone also comes with a side-mounted fingerprint sensor. Realme has equipped the phone with a 5,000mAh battery. Furthermore, the Realme C35 measures 164.4×75.6×8.1mm and weighs 189 grams.
Related Topics:
Up Next

A16 chip is coming in iPhone 14, know where the news is coming from and what can be the benefits

Panasonic company will make battery for Tesla, know what else is the news

Apple iPhone 12 gets huge discount on Amazon, know how much profit is being made

Apple iPhone 12 has received huge discounts on Amazon and interested buyers can now get it with a starting price of Rs 42,999. The device was earlier selling for Rs 59,900 on this e-commerce site, which basically means that customers are getting a discount of Rs 16,901 during Amazon’s big Diwali sale.Amazon is running its Great Indian Festival sale, which is now live for Prime members and all sale deals will be available to everyone from tomorrow. The sale will continue till the end of the month. In such a situation, if you are planning to buy a new device, then you should buy it now.

Keep in mind that the prices of iPhones on both Amazon and Flipkart are fluctuating. So, it is better to buy as soon as possible whenever you are looking at the listed devices at a low price. The iPhone 12 is currently listed on Amazon at a discounted price of Rs 42,999. But, there is also a discount of Rs 1,250 on SBI Bank credit cards. So, if you have this bank card, you can get the iPhone 12 at an effective price of Rs 41,749. By taking advantage of the exchange offer, people will be able to buy the iPhone at a much lower price. There is a discount of up to Rs 14,450 on exchanging your old smartphone. It is important to note that the exchange amount is calculated based on the condition and age of your phone. If you manage to get an exchange discount of Rs 8,000, it would mean that the iPhone 12 could be yours for less than Rs 35,000.

Is iPhone 12 worth buying in India?

Well, the iPhone 12 is currently on sale for Rs 42,999 without any bank cards or any other offers. I would say Rs 8,991 can cost more then you should buy iPhone 13 as iPhone 12 is quite old now. The new iPhone 14 is the same as last year’s model. So, it is better to buy the iPhone 13 at a lower price and still feel like using the latest version of the iPhone. The original price of the iPhone 13 is Rs 69,900, but Flipkart is now selling it for Rs 51,990 during its Big Billion Days sale. Also, if your budget is between Rs 40,000 to Rs 45,000, you can avail the exchange offer on Flipkart to get more discounts. People may also consider selling their phones to Cashify, as it usually offers better deals. The iPhone 12 is still a capable smartphone if your budget is limited. A good enough camera and general performance is to be expected. However, keep in mind that no one gets a charger with an iPhone. In such a situation, customers will have to spend more on it.

Xiaomi is soon going to launch a budget tab of Redmi, you also know

Xiaomi is reportedly planning to launch a budget tablet under its Redmi sub-brand. Expected to be called the Redmi Pad, the new Android tablet will launch globally next month, and may also debut in the Indian market, where both Xiaomi and Redmi hold a major Android market share. If the rumors are correct, this would mean that Xiaomi is now gearing up for rival brands like Realme, Nokia, Oppo and Samsung that already offer budget tablets in the country. Xiaomi’s Redmi brand is known for offerings under Rs. 20,000. The price of Redmi Pad can also be around this range.According to online publication Pricebaba, the Redmi Pad will come in three colors – Graphite Grey, Mint Green and Moonlight Silver. Through a source, it has been learned that the Remdi Pad will be offered in two storage options: 3GB RAM + 64GB storage and 4GB RAM + 64GB storage.

This indicates that the company is carefully planning the device launch without hindering sales of its more premium Xiaomi Pad 5, which is also available in India with up to 256GB of storage.Interestingly, Xiaomi Kuwait reportedly shared a post on its social media revealing the design of the Redmi Pad. According to a screenshot on MySmartPrice, there is a black camera module on the back of the Android tablet (if true). As per some other leaks, the Redmi Pad 5 packs an 11.2-inch LCD screen with 2K resolution, MediaTek MT8781 chipset, and a 7,800mAh battery with support for 22.5W fast charging. It may feature an 8-megapixel rear camera.As of now, Xiaomi India is yet to confirm the launch of the Redmi Pad. Meanwhile, the company has announced a sale offer on its smartphones and tablets with the Mi Sale as a part of Diwali.

Xiaomi is already introduced a range of affordable 5G phones in the market. As Jio, Airtel and other telecoms roll out 5G services begin in the coming months, Xiaomi will bring in more and more 5G phones that most Indian consumers can afford based on customer demand and behaviour. Speaking to India Today Tech, Xiaomi India President Muralikrishnan B said that the Rs 20,000 price segment of Rs 15,000 will increase the reach of 5G starting from the festive season. The company is gearing up to hold its festive sale, in which it will offer huge discounts on phones and products across categories.

“We hope to start it in three phases starting with tech-savvy ‘early adopters’. These consumers want to buy a 5G device with high-level specifications, preferably in the ∼20K segment because they want a future-proof device that will last them at least 2-3 years. They will be followed by users looking for 5G devices in the 15-20 thousand segment, which we think is the best location right now and will see an increase in 5G penetration,” explains Muralikrishnan. However, he believes that “the larger part will be the ‘late majority’, with users looking for smartphones in the 10-15K segment and creating the largest base for 5G in India.” “

While brands like Realme have already confirmed the launch of 5G phones soon under Rs 10,000, Xiaomi says such affordable 5G phones will take some time. And that makes sense. Asked if Xiaomi will soon launch 5G phones under Rs 10,000, Muralikrishnan said, “It will depend on the scale of the economy and hence eventually the chipset prices will come down.” “It will probably take a little more time. “

Muralikrishnan further said that he believes that “the key segments to see rapid growth in 5G will be 10-15K and 15-20K.” “As a consumer-centric brand, it’s our strategy to anticipate demand and bring the best-in-class device at a reasonable price.” “

With the same objective in mind, the company recently launched the Redmi 11Prime 5G supported smartphone for a 4GB RAM + 64GB storage model with a starting price of Rs 13,999.